Twenty Three Down, One Hundred Thirty Nine to Go

Here’s some thoughts, reactions, and over-reactions to the Red Sox after twenty three games: 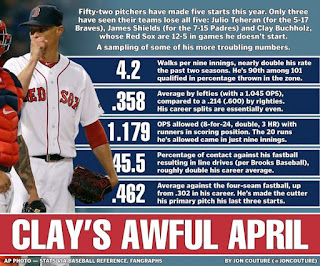 After beating the Yankees last night, the Red Sox are now 13-5 in games that Buchholz doesn’t start, and 0-5 in games that he does start (I believe I also heard last night that the Red Sox are 14-5 in games that Brock Holt starts in LF, while he scored the winning run and gunned out Starlin Castro at the plate last night). How much longer do we sit back and wait for Buchholz to figure it out? If Ryan Hanigan can keep working with Henry Owens, does Eduardo Rodriguez replace Buchholz when he comes back, and Clay goes to the DL? Yes, Clay usually figures it out as the weather warms up, but this Sox team is firmly in contention. How many May games do we throw away waiting for Clay to find his rhythm?


That ball boy is looking for Ray Finkle.....and a clean pair of shorts. We’ll always love Big Papi.
All for now. Let’s win the series against the Bronx Bombers tonight. Stay tuned for another Red Sox Maineiacs live chat for this week’s Sunday Night Baseball game.
Posted by Unknown at 10:10 AM